Art History: Franz Marc – The Fate of the Animals

Currently listening to: (Don’t fear) the Reaper, cover by Pierce the Veil

Art History: Franz Marc – The Fate of the Animals 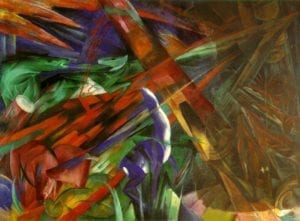 I could just tell you that I love The Fate of the Animals by Franz Marc, but I don’t think that would do the work or my liking of it justice.

If you’ve clicked on the above link, you’ve probably had time to form your own opinions about the artwork I’m referring to. Though every painting impacts each of us in unique ways, I can only express it’s mark on me.

I recall the first time I saw the painting in my Modern Art class at Missiuri State. I had just learned about some of Marcs’s previous works where he had expressed an interest in the innocence of animals. He often focused on horses for subject matter and depicted them in harmony with their surroundings attempting to display their purity. His earlier works are lovely and I love them as much as the later pieces.

Aside from the immediate gripping composition that stole my favor the first time I saw this painting that day in class, I think what really drew me to it was it’s change in comparison to his previous works we had just been viewing.

Suddenly this painting seemed to scream of violence as abstract pointed shapes crashed around and even through the animal subject. What was most fascinating about this new portrayal of his animal subjects as well as their environment was that I immediately knew this artists emotions and perceptions had been drastically altered, even before my instructor expressed that to the class.

As she went on to explain that Marc had decided animals were not any cleaner than humans, I wondered what had been the catalyst for such a sudden departure from his previous thinking. Why had his lovely flowing horses been replaced by sharp pointing objects? She then revealed the painting was created as the developments leading to the first world war were taking place.

That’s when I knew why this painting instantly pulled me in forcing me to feel loss and danger, because it was a human reaction to one of man’s most heartbreaking experiences. I could go on about his use of colors or the execution of composition effectively leading the viewers eyes through the piece, but I think what is most important to emphasize is what’s real about the work. I want to emphasize what the piece does for me; that it makes me face how devastating just the notion of war can be for the human mind.

I discuss a lot of things on this blog from my writing, other authors and great books to my favorite shows (all of which inspire me), but lately I’ve been neglectful of discussing visual art. So, fellow Fine Art lovers, this is for you =) This may be my own misconception, but it seems like […]

Within the past week I had an opportunity to watch a documentary on the Chauvet Cave Paintings in France. In school I learned that the Chauvet paintings were the first cave paintings still in existence dating back 32,000 to 35,000 years ago. More recent findings suggest the paintings found in the Altamira Cave of Northern Spain are actually the […]