Congrats to all you awesome guessers from last week. Everyone guessed the MashUp, it was Monster’s Inc and Ghostbusters. Or as I like to call it: Monsterbsuters! Refer to last weeks post if you want to read the MashUp story 🙂 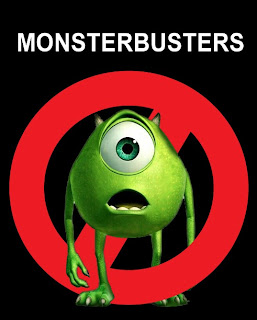 As a bonus, I’ve collected some facts from Ghostbusters and Monster’s Inc to share:

On the set, Dan Aykroyd referred to the “Slimer” ghost as the ghost of John Belushi.

Flashbulbs were used on the business end of the proton pack weapons so that the special effects creators could properly synch up the effects with the action (most visible in the dining room scene, frame by frame, when capturing Slimer).

Early publicity for the film was a teaser campaign featuring just the “no ghosts” logo. As the campaign built, the Ectomobile was also driven around the streets of Manhattan (IMDB).

The Ghostbusters New York City firehouse is actually real and operational. It wasn’t just a set.

Because the script called for her transformation into a dog, Sigourney Weaver reportedly barked during her audition (Tor).

This fact is ironic, given it is about Billy Murrey from Ghostbusters. Supposedly, he was the first choice to play the voice of Sulley. He even auditioned and was interested, but miscommunications led to him missing out after the audition (Funny Madness).

There are over 2.3 million individual hairs on Sulley’s body.

Boo is holding “A Bug’s Life” in her hands when she knocks over DVD’s in Sulley’s apartment.

Pete’s Barber shop is named after the director, Pete Docter.

My favorite fact was the Billy Murrey one… who knew? Thank you all for visiting. Hope you have a great week 🙂