Hey guys. Everyone who guessed last
week on the Movie Mashup… nailed it! But if you missed the mashup, here’s a
quick review of the clues before I reveal the answers…
In this mashup, a Disney character has stumbled upon a magical
lamp during his travels. He had a wrestling match with a monkey in a hat, but
he won the lamp for himself. See if you can guess which character has stolen
from the monkey based on his wishes…
I wish I had big wings
I wish I had all the riches in China
I wish this annoying little cricket would get a life and bother
someone else
I wish I would be better at using chopsticks
I wish dishonor and stinky feet on all dragons who think they’re
better than me
I wish for a big juicy turkey… because it’s just that time of
year
The two mashed up movies were Mulan and Aladdin. It was
Mushu who got in the fight with Abu and wished stinky feet on all dragons who
think they’re better than him. Nicely deciphered guys =) 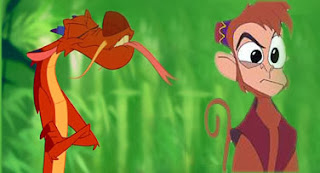 Also, this year I participated in NaNoWriMo! It was awesome
=) I wrapped up at 53,001 words on The Haunted Realm (name that I’m considering
changing), which is the first draft of the sequel to The
Labyrinth Wall (if you’re looking for blog events, The
Labyrinth Wall blog tour is coming up).

My mind is a bit fried in the after math of this month. I’ve
never done a writing competition like this before, so it was a huge challenge
and a fun ride. I jumped in late (five or six days?), wrote a whole lot for
about two weeks, then got busy and ended up finishing half of the book over
Thanksgiving break. My fingers have literally never typed so fast =p

I’m really glad I got to participate. I had no idea how
motivational it is to know so many other people are in the same boat. Seeing
other people’s updates and tips kept me motivated. Being motivated by peers was
probably my favorite thing about participating.
So I’m curious. Have you participated in NaNo before? If so,
what was your style? Were you good about sticking to the daily word count? Or
did you write in odd spurts? What was your favorite thing about the event?
Hope you have a great week everyone. I’ll be back in a
couple days because there’s more fun things going on like the Dream
Destination Blog Hop and Rachel
Morgan’s got some exciting new covers to reveal.
Moonless Blog Tour Dream Destination and Creepy Hollow Makeover