Welcome to “Throwback Thursday Fantasy Relay.” What will you
find in this series? I’ll feature either a Fantasy book or movie, share some
lesser known information on it and if I’m familiar with it, I’ll share a brief
review as well. 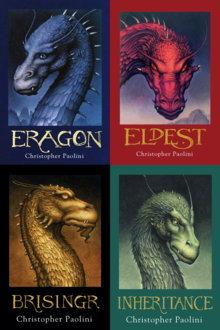 My husband also shares a love for fantasy books and movies,
and he suggested I mention the Inheritance Cycle in this series. If this doesn’t
sound familiar at first, perhaps the name of the first book will jog your
memory: Eragon.
Original release year:
First Volume: Eragon, 2003
Author: Christopher
Paolini
Summary of Eragon from Goodreads:
One boy . . .One dragon . . .

A world of adventure.

When Eragon finds a polished blue stone in the forest, he thinks it is the
lucky discovery of a poor farm boy; perhaps it will buy his family meat for the
winter. But when the stone brings a dragon hatchling, Eragon soon realizes he
has stumbled upon a legacy nearly as old as the Empire itself.

Overnight his simple life is shattered, and he is thrust into a perilous new
world of destiny, magic, and power. With only an ancient sword and the advice
of an old storyteller for guidance, Eragon and the fledgling dragon must
navigate the dangerous terrain and dark enemies of an Empire ruled by a king
whose evil knows no bounds.

Can Eragon take up the mantle of the legendary Dragon Riders? The fate of the
Empire may rest in his hands.

What makes this series special and what influence has it had?
At the time, Christopher Paolini and
this series attracted a mass of fans and media attention, not only because the
first book was well written, but because he was 17 when it was published! What
an accomplishment for such a young man and inspiration to all of us.
A movie was made based on this book, though many fans and
critics feel the adaptation did not do the story justice.
It’s truly fascinating to hear about the Author’s process
and interests in writing. Here’s a great interview with Christopher:

Post by The Inheritance Cycle – Alagaesia.com.
My Review:
This one is another that’s on my to-read list. However, it
is one of my husband’s favorite fantasy series. He has pretty simple standards
for what makes a good book in his eyes, and they were met with these books. Here
are a couple reasons he says Eragon, Eldest, Brisingr, and Inheritance are some
of the best novels he’s read: it’s well written and there are clear rules for
the fantasy world. So there you have it, if those are important qualities to
you, you’ll want to check these books out.
He gives The Inheritance Cycle 4 Stars J
Questions:
Have you read the Inheritance Cycle? Do you like the series?
Are there other fantasy favorites you’d like to see featured in this series?
Thank you for visiting the blog and website of Young Adult
Fantasy Author, Emilyann Girdner. Please feel free to browse, check out her
publications or reach out to her with questions or concerns at
emilyann@thelabyrinthwall.com.
Throwback Thursday Fantasy Relay: Labyrinth! Movie Mashup Monday: Mermaid Butt

SciFi & Fantasy Story Inspirations: Guardians of the Galaxy Feature   Writers are often asked for ideas on how to come up with a fantasy story. This is one of my favorite topics, so here’s one thought I’ll share on coming up with ideas or even staying motivated while writing. Many writers and artists I know […]