The Hulk in Wonderland

A Movie Mashup: Alice in Wonderland and The Hulk

Summoned there by the dreadful queen of hearts, the Hulk found himself responsible for the fate of Wonderland…

Alice arrived in Wonderland when she chased a rabbit whom she’d hoped to catch for dinner down a hole. After a chaotic journey through tunnel systems, Alice discovered Wonderland. She had lived a hard life being the daughter of a thief, so she wasn’t anxious to leave Wonderland. In fact, Alice ventured to the palace in search of more goods. There she was captured for stealing by the evil queen of hearts.

However, weak and malnourished Alice pierced even the evil queen’s heart so she happily took her in as her own. Alice, her heart cold as ice, expressed gratitude, but truly only hoped to learn dark magic from the queen and steal her throne. She was a rotten girl.

So when Alice attempted to kill the queen, the queen of hearts fled her castle. Alone and the target of many who had grown to hate her, Alice among them, the queen hid out in the woods. That is where she met the Cheshire cat. The Cheshire cat told the queen about the legend of the Green Monster Man.

“You could take back what’s yours…” suggested the cat.

“You’re mad cat. My magic is gone because Alice took it. How would I stand up to even one guard, much less Alice and her magic?”

“I’ll tell you again… The Green Monster Man can help you queen. He lives far far away, but if you summon him with the power of the blue mushroom, he will have the power to help you.”

“Yes. In his land, he only has special strength, but can’t access his recessive abilities. But in wonderland he can, or should I say, you can.”

“Assuming this is all true and I summoned him, how do I know he even would help me?”

“Oh, he probably wouldn’t want to, but the blue mushroom will make him yield to your wishes.”

“And then I could do anything I want” she nodded.

“For a time, but you’ll only have a small window to make use of his powers.”

“The mushroom works for a few days, and then it wears off” replied the cat.

The queen had no other options, so she took the cat’s advice and summoned the Green Monster Man.

“Not again” the man sighed when he appeared before her.

The queen’s eyebrows scrunched up “you’re going to have to brighten up that tone. We’ve got work to do.” 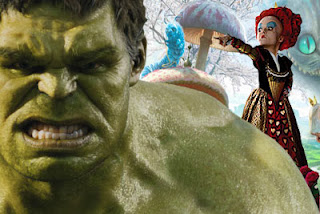 “I suspected as much” his giant fingers plowed through his hair with frustration. “You think this is the first time I’ve been to wonderland? It was the Cheshire cat that told you to summon me wasn’t it?” his giant fist hit the tree beside him.

The queen didn’t falter “That doesn’t matter. Let’s head to the castle.”

So the Green Monster Man accompanied the queen to the castle, as she wished. Clearing through the guards and right into the throne room, the queen and the man besieged the castle.

“What is the foul creature?” Alice demanded from her throne, as the green towering person tore into the room.

“This hulk is my servant Alice” the queen giggled.

And so when all the fighting came to an end, Alice was banished back to her home world and the Green Monster Man (who was referred to as the hulk in his world) disappeared from wonderland as well. But after all that the queen had been through with Alice, she had seen the harsh conditions outside her castle walls. Even when she had the chance to kill Alice in revenge, she instead sent her away. Ever after that, the queen’s laws became more lenient and she eventually quit wearing red or hearts at all. She cast the past behind her and led Wonderland into an age of happiness as the white queen. Alice remained forever back on Earth, and she never outgrew her rottenness. She spent the rest of her life trying to go back to Wonderland, but failed over and over.