Welcome to Throwback Thursday Fantasy Relay! What will you find in this series? I’ll feature either a Fantasy book or movie, share some lesser known information on it and if I’m familiar with it, I’ll share a brief review as well. The fantasy genre is vast, encompassing epic fantasy, contemporary fantasy, and more, so this series is full of variety. There are so many fantasy films and books that are making a lasting impression on society and are worth discussing, so here I
go…

The Hobbit Book Summary from Goodreads:

In a hole in the
ground there lived a hobbit. Not a nasty, dirty, wet hole, filled with the ends
of worms and an oozy smell, nor yet a dry, bare, sandy hole with nothing in it
to sit down on or to eat: it was a hobbit-hole, and that means comfort.

Written for J.R.R. Tolkien’s own children, The
Hobbit met with
instant critical acclaim when it was first published in 1937. Now recognized as
a timeless classic, this introduction to the hobbit Bilbo Baggins, the wizard
Gandalf, Gollum, and the spectacular world of Middle-earth recounts of the
adventures of a reluctant hero, a powerful and dangerous ring, and the cruel
dragon Smaug the Magnificent. The text in this 372-page paperback edition is
based on that first published in Great Britain by Collins Modern Classics
(1998), and includes a note on the text by Douglas A. Anderson (2001).
Unforgettable!
What are some of the ways The Hobbit has left a mark on
culture?
From South Park to Flight of the Conchords and various other film and music
mentions, The Hobbit and The Lord of the Rings are incredibly influential in
both American culture and cultures throughout the world. And who can forget
that this relatively short children’s book has been adapted not only into an
animated cartoon, but now a blockbuster live action movie trilogy as well? From jokes about second breakfast to
teasing friends about their “hobbit feet,” current generations seem to have deemed
Tolkien’s The Hobbit as one of the most impactful fantasy books of our time.
Fun Fact About The
Hobbit You May Not Know:
The name “fantasy” for a genre was developed in
reference to J.R.R. Tolkien’s The Hobbit. The
term “fairy tale” was still being used for books of this nature until
that time (according to Wikipedia).
My Review of The Hobbit:
If you haven’t read
The Hobbit, beware of spoilers ahead…
One excellent line
from the book that stuck in my head is “no great leap for a man, but a
leap in the dark” (The Hobbit revised publication, by J.R.R. Tolkien, pg
87). This was said about a literal leap in the dark that Bilbo was bravely
taking to escape an enemy. It resounded with me strongly because I thought of
how sometimes in life we take chances that may not really be known or truly
understood by others, but that we know are meaningful. These kinds of moments
when we take leaps that only we know we are taking can prove to be some of the
most defining times in our lives (just as in The Hobbit, I do feel this
particular leap of Bilbo’s was one of his bravest acts from which he gained
confidence).
Though this was by no means the only comical moment in the
tale, I chuckled out loud when Bilbo said this to the dwarves “come along
back to your nice cells and I will lock you in again, and you can sit there
comfortably and think of a better plan” (The Hobbit revised
publication, by J.R.R. Tolkien, pg 179). This was a “good for
Bilbo” moment and the line is just so witty. It was such a fun moment in
getting to see this character’s evolution.
Many important morals and lessons are worked into this
children’s book, but one that made me particularly fond of Bilbo was his
attitude toward the treasure. He had proven that he cared about important life
matters like fairness and peace over his care for wealth previously, but toward
the end of the book he said something additional on the subject that I really enjoyed.
After refusing to accept some treasure offered to him he said “but really
it is a relief to me. How on earth should I have got all that treasure home
without war and murder all along the way, I don’t know. And I don’t know what I
should have done with it when I got home. I am sure it is better in your
hands” (The Hobbit revised publication, by J.R.R. Tolkien, pg 293).
So not only did he prove his desire for peace over the treasure, but he shows
great wisdom and humility with his statement that he wouldn’t have had anything
useful to do with treasure therefore it was better off in the hands of someone
trustworthy.
From a character growth aspect, I also love Tolkien’s theme
that the little guy can do big things. Both Bilbo and Frodo were small and
gentle hobbits, who may not seem like hero material according to traditional
stereotypes. However, they were able to accomplish amazing things against great
odds, just like David fought and won against Goliath. The leadership and pupil dynamic between Gandalf and Bilbo was also quite enjoyable. 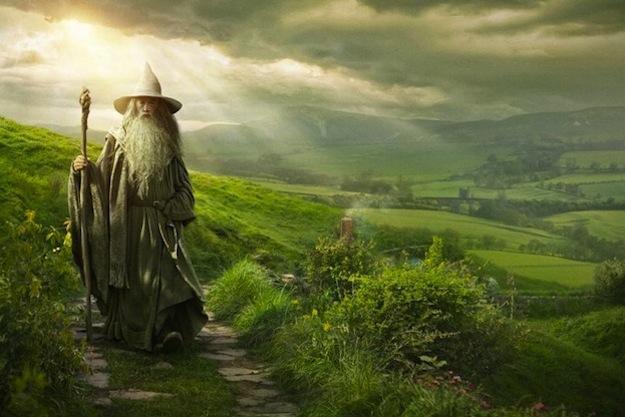 There were many more moments that had me thinking, laughing
or my imagination leaping with wonder, but these are what I sorted out to
share. Today I will leave with some questions relating to Bilbo’s experiences
that I invite you to answer. Was there a time you can recall that you took a
brave leap in the dark like Bilbo? Also, I would love to hear your favorite
moments from The Hobbit if you care to share.
Keep imagining,
Emilyann
Throwback Thursday Fantasy Relay: The NeverEnding Story! Throwback Thursday Fantasy Relay: Once Upon a Time!