Proceed in reading Ella’s diary featured below with
sensitivity. Keep in mind, thanks to her curse in which she had to obey
whatever she was told, she couldn’t have prevented her actions. Once
mischievous Puck got wind of Ella’s condition, he couldn’t resist having some
fun.
Today I stirred up
havoc in the town. I hate this curse! Some horned creature that calls himself
Puck got me into every manner of trouble. I stumbled upon him in the bakery,
but no one else could see him; that’s how he knew I had been exposed to magic.
I interrupted what he described as his best trick in three weeks, something
about turning the baker into a into a rolling pin.

“I can’t help you if
you don’t see the irony in that” he chuckled as he stroked his beard.

“Well this looks like
more trouble than I’m interested in” I immediately replied, as I tried to make
my exit. But of course the encounter wouldn’t end there. Telling endless jokes
he stalked me through the streets for a good ten minutes. He spoke in metaphors
and even rhymed some of the time. Most of what he said made no sense. I thought
I’d get rid of him by doubling back toward the castle, but instead I angered
some guards, which is when Puck realized the nature of my curse.

Oh he loved it. He had
me juggling for the guards and trimming all the hair from the royal horses (to
be thrown in the prince’s bread). I must have insulted about two hundred people
before the day was out thanks to him. Then there were all the crickets he had
me put into all the castle closets. That’s when Puck himself slyly doused the prince
in purple dye water (not that the prince had a clue who was responsible). 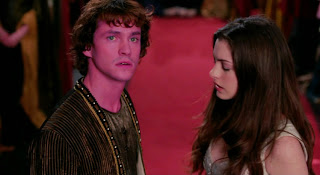 His
natural reaction was to search for a dry change of clothes. Well, you can guess
how angry he was to have his room overrun with crickets after opening the wardrobe.

I can only be grateful
I seem to be rid of that clever man named Puck. He said I’d been a terrific
help and had made up for interrupting his rolling pin plans. I’m not sure where
he came from or he went, but I do plan to stay away from the baker’s shop. And
hopefully I don’t run into those angry horses anytime soon either.
Catwoman of Oz Terry Brooks Interview Live Chat on Goodreads