Nicole Zoltack loves to write in many genres, especially fantasy
romance. When she’s not writing about knights, superheroes, or zombies, she
loves to spend time with her loving husband and three energetic boys. She
enjoys riding horses (pretending they’re unicorns!) and going to the PA
Renaissance Faire, dress in garb. She’ll also read anything she can get her
hands on.
After you check out her interview below, don’t forget to visit Nicole
at her blog.

Getting to know Nicole…

Can you
briefly tell us a bit about yourself?
Of course! I’m a mom first and foremost – all boys: a 5 1/4 year
old, a 3 3/4, and a 2 year old. And I’m a wife. Married my college sweetheart,
my first real boyfriend, and my first kiss. What can I say? It’s no wonder I
write romances!
Besides, writing and reading, I’m a fitness nut. I love to go
horseback riding but haven’t in ages and desperately miss it. I would love to
take karate lessons, learn how to shoot a bow and arrow and how to fence. Maybe
someday.
I live on hopes and dreams and basically, that’s me!
If you
told someone they could understand you better by reading three books, which
would they be? Why?
Anne of Green Gables. I’ve always related to Anne and her desire
to find herself and be true to herself, and her love of learning!
Outlander. It’s so many genres all at once – historical, action,
adventure, romance… just like I write in multi-genres.
The Bible. I’m Catholic. Went to Catholic schooling from
kindergarten up to and including college.
Being
that the title of this blog is Anything Imagined, it seems appropriate to first
ask how you get inspired and what boosts your imagination?
I’m inspired by life. Seriously. Anything can give me a story
idea. Watching TV or movies, listening to music, going for a walk, other books,
random conversations, eavesdropping… even dreams!
What
would you say has been the biggest challenge for you as a writer?
Finding enough time to write and edit. I have a ton of story
ideas that I haven’t even started yet. I’ll never run out of ideas. I’ll run
out of time first!
Have
you overcome the challenge and what would you say to someone else facing the
same struggles?
Starting last January, I’ve made it a point to write at least
100 words a day, with the goal of writing 365,000 words for the year. I ended
up writing over 645,000. Even if you only have five minutes to write one day,
use those five minutes. Every little bit adds up.
What do
you hope to achieve through your writing and creative pursuits?
I’d love to be the next JK Rowling. J More seriously, I just
never want to stop writing. Whether or not I sell a gazillion copies or get on
lists doesn’t matter. I just want to reach as many readers as possible. 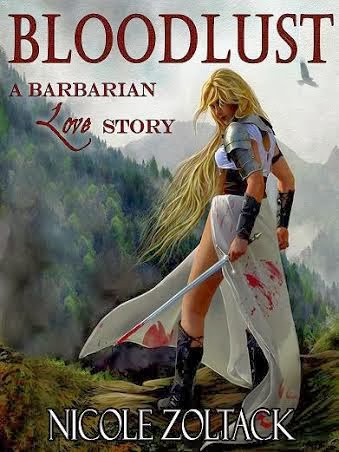 Kindle & Nook
How did
you up with the idea for Bloodlust?
I’ve always been interested in the more obscure fantasy races,
or ones that people don’t always think about first. I like bringing them to
life and give them personalities beyond their stereotypes.
So first I came up with Ivy, a barbarian princess. But who could
be her match? Not another barbarian…
And the wheel kept turning and changing and evolving until it
became an epic fantasy story with an almost Romeo and Juliet type of forbidden
love.
What
character did you most connect with when writing the story?
Ivy. She’s so complicated and complex. She’s definitely a doer,
but she changes throughout the story. I connect with her the most because she’s
so real and true.
Where
can we find you and Bloodlust online?
I’m everywhere. Facebook, fan page, twitter, blog, pinterest.

Nicole, you definitely lead an exciting life.
When you learn to shoot arrows, you’ll have to teach me. And that “every little
bit adds up” advice is so true and encouraging. And Bloodlust? It sounds amazing.
I love your creativity of picking a princess barbarian. And who doesn’t love a
forbidden love story? Thank you so much for swinging by to share your thoughts
and book with us.
Bloodlust
Overview from Barnes & Noble…
In a world torn by prejudice and
hatred, six races struggle for supremacy.

Barbarian-Princess Ivy is unwilling to allow her father to provoke the other
races into war and forms an unlikely alliance with Lukor the goliath to save
her people from utter destruction. Unbeknownst to her, Lukor blames the
barbarians for murdering his sister and plans on sabotaging her goal.

Almost despite each other, they grow to respect one another on their journey to
decode secret messages from the trolls. But nothing Ivy can do will prevent the
war as her father is blinded by Bloodlust and incites it himself. Not even
killing him and becoming Barbaroness can stop the tide. And when Bloodlust
claims Ivy, forcing her to kill everyone in her path, she must make a choice to
destroy even Lukor, who she may have started to fall for, and him her in return.

“We’ll all be digested” Armageddon Man

Win a $15 Starbucks Gift Card & Other Prizes During The Realms Faire!

The Realms Faire! Lady Girdner is Jousting Happy Friday Everyone! All week I’ve been mentioning the Realms Faire. I’m super thrilled that I’ll be featured in the Faire today at http://mpaxauthor.com/blog/. If you have a few minutes, pop by and thank MPax for hosting this event and leave me some comment love mentioning the key words listed below. […]

What will you find in the “Throwback Thursday Fantasy Relay” series? I’ll feature either a fantasy book, TV show, or movie, share some lesser known information on it and if I’m familiar with it, I’ll share a brief review as well. The fantasy genre is vast, encompassing epic fantasy, contemporary fantasy, and more, so this series is full […]