Hello
friends. You may have noticed I missed posting a mash-up last week. I do
apologize and hope this week makes up for it.
Its Movie Mash-Up
Monday – I’m mashing them up for you… enjoy!
This week’s mash-up
features The Addams Family and The Ring
It was a cold, stormy Monday evening. Cousin It sat lonely
and bored in front of his television. Plucking stray hairs from his couch, he
thought of great things to watch on Netflix. He was dismayed to discover his
service was disconnected by the storm. Then it caught his eye, the old dusty VCR.
With hesitation, he pulled out a tattered cardboard box of movies, given to him
not that long ago by a recently deceased co-worker. Scanning the odd variety of titles like The Wizard of Oz,
The Exorcist and The Parent Trap, he stumbled across a blank tape.
“Thsid myu bdoo” he muttered out loud, meaning “This will
do.”
Ten minutes later he stared blankly at the television,
thinking to himself what great art had just crossed his screen. He analyzed the
meaning of the strange compilation of images until he was startled by the
shrill ring of his phone.
“Heylo” he answered cheerfully.
“You will die in seven days” a mysterious voice conveyed.
Cousin It stiffened with fright. “Buyt Ie doana teyl lyys”
he responded, attempting to convey that he doesn’t tell lies.
“No, no! You will die in seven days” the caller replied hoarsely.
“Oh” he nodded his head with understanding “Ohhh” the words
sank into Cousin It’s mind just before he heard a click and the call ended.
Now Cousin It is was really a very gentle, kind soul who
lived to make others smile. Prank calls weren’t his sort of humor so he all but
forgot about the strange incident within the week. He did, however, revisit the
unlabeled video from the old box every night for six days. Thinking about the
odd compilation, he even felt he had deciphered its message. It was as if the
movie had come from his own heart. It conveyed the trials of brushing long
hair, the sickness of regurgitating unavoidable hair balls and strange
creatures like centipedes that sometimes emerged from very hairy places. Like
the horses sun bathing on the beach, the maker of the movie clearly even shared
Cousin It’s desire for a sunny getaway spent resting on the coarse sand,
partially dipped in salty water. He wished only that he could meet the soul
that created such a moving film.
Then on the seventh night after the phone call, Cousin It arrived
in his home to find the television was already on. It was paused on the well scene
from the unlabeled tape. That was when his dreams came true. Emerging from the
screen was a slimy girl. Cousin It’s heart rejoiced at the sight of her dark
hair.
“Itaas yew” he exclaimed. Certain this girl was the creator
of the film, Cousin It excitedly asked questions and complimented her work.
Though he could not see, she smiled behind the thick hair covering
her face. Never had anyone truly understood her creation before. Never had
anyone cared for her before. That night was the first that Samara did not kill
her intended victim. It was instead the first conversation of what became a
long and unbreakable friendship. 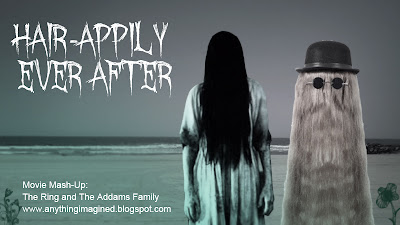 Thank you for dropping by and checking out the post. Your
readership and visits are so appreciated. How was your weekend? What kinds of
fun creative ventures do you have in the works? Also, any movies you’d like to
see mashed up?
Zombieland it on! Flashback: What is human?