It was the Toro Cheerleading squad’s last practice before
the national championships that began the world changing zombie epidemic. The
routine was planned to perfection with every possible fancy move in the book. But
when Torrance, captain of the squad took a nasty fall, the squad was determined
to get her back on her feet so they could win their trophy. Unfortunately, her
dead-like state presented a bit of a challenge for the hopes.
That was when they whisked Torrance off to Wichita’s house…
the odd girl at school who had always joked about being able to bring people
back from the dead.
“ You’ve got to save her” insisted Missy, a squad member, as
she pointed to her breathless friend. “We need her to win the competition.”
“Oh, ha. You’re joking right? Save her so you can win a
competition?” Wichita cleverly responded. “Also, you know she is completely
dead, right?”
“You always say you can bring people back” Missy retorted.
“For a price” Wichita smirked.
“Name it” Missy insisted.
“It’s going to cost you all of humanity” Wichita chuckled
quietly. “Can you handle that?” she turned away to continue about her business.
It never occurred to her anyone would every actually accept that deal.
The squad glanced around at each other, almost as if they
had made the smart decision to leave. Of course, that wasn’t the case. They
agreed to Wichita’s terms, not truly believing there would be any consequences.
“Finally” Wichita hissed in a mischievous tone. She dashed
to her basement, extracting a strange orange liquid. The liquid also required
drops of blood from four of Torrance’s friends.
“GRrraarl” Torrance began groaning about twenty minutes
after the orange liquid entered her system. The first zombie of the apocalypse was
unleashed and immediately infected the rest of the squad. 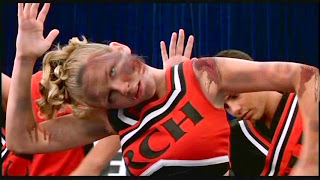 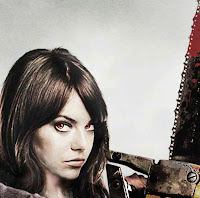 Wichita drove away leaving the dust, zombie
cheerleaders and town in which she had been imprisoned behind her. She hadn’t ever cared much for the place anyway; she hadn’t cared much for the mortals. Her
eyes glowed red as the demon sped off to locate her few allies from hell so
they could begin their rule of Zomebieland on Earth.

Also, stop by and check out the Blogging from AtoZ Challange!! It is April and that means some fun excitement in blog world.

R2-D2 and the Shanghai Wars Hair-appily Ever After