Best-selling novelist Paul Sheldon and his famous
movie star sister, Anna Scott, are on their way home from his Colorado hideaway
after almost completing his latest book. They are sadly mistaken in believing
they will make it home for Holiday celebrations. Crashing their car after
nearly killing a man on the road during a blizzard is the least of their
problems.
Paul is critically injured and has no idea where
Anna has gone. He awakens on Misery Hill in the secluded home of Annie Wilkes, Anna’s
biggest fan. Unfortunately for Paul, Annie is convinced Paul murdered Anna. Genuinely
concerned of the whereabouts of her idol, Annie attempts to phone the police,
only to discover the blizzard has knocked out the phone lines. A rational woman,
Annie resolves simply to hold Paul captive until she can reach help. In the
meantime she sets out for the crash site again, hoping to locate Anna, or at
least her body.
Skin blue from the cold, tears dried to her face,
Annie returns having had no success. Step by step entering back into her home,
a hushed man’s whisper echoes her footsteps “Annie, Annie had to help Paul.
Annie, Annie, now neither of you will survive at all.”
Pushing the kitchen door open in a panic, Annie
discovers Paul in the same place she left him but not in the same condition.
Where she had left him tied to a support beam, he now lay free of restraints.
Still he did not move from that location; his legs busted to bits. Tears
streamed from his eyes.
“Chapter 15, page 212, Mayer’s Revenge” a man’s whisper
came again, this time directly into Annie’s ear. A warm breath collected on the
back of her ear. She whipped around to find herself face to face with a strange
man.
“William Thatcher” he snickered as he shook the
woman’s hand so forceful he broke her ring finger. She jumped away only to be
grabbed by the shoulders and pinned against her kitchen wall.
“Annie, I see you’ve met my other brother, William” a
woman hissed.
Annie’s eyes took in the long brown wavy hair, brown
twinkling eyes and sweetheart smile. “You” was all she could quietly produce
from her lips.
Anna Scott’s cold smirk exuded every opposite personality
trait from the interviews Annie had ever seen on television. “You know, Annie.
It really didn’t have to be this way. You just had to meddle, didn’t you?” She
glanced over to William, who was crouching next to his brother, Paul, and
poking him with sharp kitchen utensils.
“You see why he has to die,” his eyes then shifted
back to Annie “why you have to die?”
“I don’t understand” Annie screamed.
William lifted Paul’s chin and they locked eyes “Chapter
15, page 212, Mayer’s Revenge” he repeated. “You stole my writing all my life.
Everything the world ever thought you wrote… it was all mine. But it’s okay,
brother. I’ve been waiting for this part of the story for a long time.”
Another tear trickled down Paul’s chin. The tear was
one of guilt and not pain. Then the life went out of him as William snapped his
neck.
“Too bad, Annie” Anna didn’t miss a beat at the
death of her oldest brother. “Wrong place at the wrong time” she braced her
hands around Annie’s head. Annie thought maybe she heard a snap, and then it
all went black. 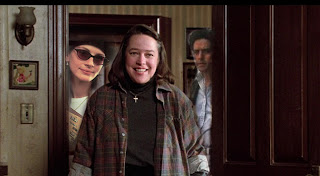