It’s Movie Mash-Up Monday – I’m mashing them up for you… enjoy!
This week we have Back to the Future (at Jocelyn’s request) and The Mummy…
Marty McFly’s near death experience when he almost caused his parents to never fall in love was only the beginning of his time traveling adventures. Of his countless stories that should have made the history books, it is perhaps how Marty attained his dearest pet that is the most remarkable.
Sand seemed to have uncomfortably invaded McFly’s eyes, ears and nose as he fumbled about in an Egyptian city. It was 1923 and his lovely DeLorean was tucked safely away from any potential viewers. Having hoped to go under cover and meet his distant relative whom he discovered was quite an accomplished archeologist; McFly would soon discover his relative also had a knack for trouble. 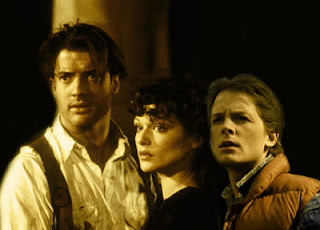 It was particularly his great, great Aunt Evelyn’s discoveries in Hamunaptra that made her a historical figure. It turned out her dig was trouble from the start. As if the blazing sun and lack of water weren’t keeping everyone on their toes enough, men started disappearing. Having slipped into the mix as an assistant to Rick O’Connell, McFly unexpectedly found himself helping with the disappearance investigations. Quickly the group determined that something was not quite right after encountering a homicidal mummy under a pyramid.
Nearly losing his head in the process, Marty McFly knew at first sight that mummy had to become his pet. He developed compassion for the “monstrous mummy” that McFly deemed was simply misunderstood. While the rest of the group fled upon hearing rumors of the killer mummy and dangerous beetles, McFly made himself known to his great, great Aunt Evelyn. He even showed her his DeLorean, which she thought was quite ugly.
“You’ve got to help me save this poor mummy!” he begged Evelyn. With no children of her own, she immediately caved at her distant nephew’s request. O’Connell, having developed a fondness for Evelyn offered to assist. A traveled genius, McFly knew the key to taming a mummy. The ancient chant of ages would do the trick if they could just get close enough to it without getting killed.
Setting the trap was no issue. O’Connell had discovered a sand pit in a lower chamber. In the chamber they camped for two days until finally a wretched low growl preceded the mummy’s grand entry into the space. Eyes lit with rage the creature began sinking just as they hoped.
“The itsy bitsy mummy got decomposed and grouchy… down came his master’s love and washed the grouchy out” Marty chanted to the sinking monster. Seeing the creature was still lit with rage, Marty began to think his plan would fail. But then, on his third repetition of the chant, the mummy’s eyes became soft as he smiled. Swiftly, the group threw him a rope and pulled him to safety. McFly and his beloved pet mummy, Sandy, lived happily ever after.
The End. 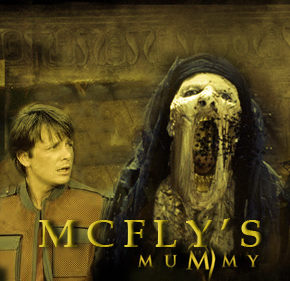