It’s Movie Mash-Up Monday – I’m mashing them up for you… enjoy!
This week we have The Switch and Mannequin…

This story begins in ancient Egypt. A girl named Emmy is about to be forced into an arranged marriage. But she prays to the gods to be united with her true love. As a result of her prayer, Emmy vanishes before her mother’s eyes. She ends up traveling through history and meeting famous people of different time periods on her search for true love.

Fast-forward to present day in New York City. Jonathan Switcher is an artist working in a mannequin factory. Perfecting the mannequin he is currently working on; he is meticulous about his creation. His time spent on just one Mannequin irks his boss who claims he needs to be working more on quantity than quality. Jonathan protests, but is fired.
Meanwhile, a woman named Kassie and her friend Wally are reuniting after seven years apart. Though they are thrilled to be together, the cause of their reunion is less than happy. Kassie’s son, Sebastian, has been acting out. Kassie believes that maybe Wally can be a positive male influence in Sebastian’s life. Wearing woman’s clothing and rattling on about true love, her son almost seems like a woman. Sebastian even claims he is a woman. 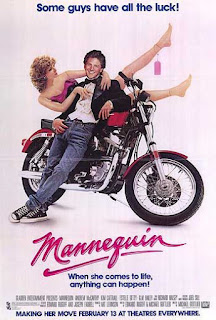 In reality, Sebastian’s body is inhabited by Emmy. In her quest through time for love, Emmy came so close when she nearly landed in Jonathan’s Mannequin. But just as she was ready to enter the mannequin’s body, her spirit was thrown into Sebastian as a cruel trick by the gods. Unfortunately, Kassie believes no part of Sebastian’s (or truly Emmy’s) claims.
Now, having been fired from his mannequin making job, Jonathan has a new job. By coincidence, he is actually working at Prince and Company, the same store where Sebastian (in Emmy’s mannequin body) is on display.
Though things look bleak for the switched souls, Sebastian does discover a love for window displays. It is Sebastian’s odd music choice of listening to “Girls just wanna have fun” that first tips Wally off that something isn’t right. But Wally really becomes concerned when Sebastian puts on a blonde wig and red dress.
Having demanded Wally drive her to Prince & Company, Emmy (in Sebastian’s body) arrives just in time to see Sebastian (as Emmy) awkwardly telling Jonathan he who he is. Having enjoyed their laughs, the gods finally switch them back to their true bodies… And they all live happily ever after!
McFly’s Mummy Terminatorless