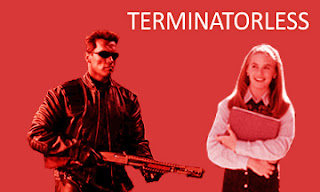 Terminator and Clueless….
Skynet, an advanced computer is fighting against a human resistance in the year 2029. Skynet has sent some of it’s warriors, called Terminators, back in time.
One of these Terminators was sent to kill the resistance leader’s mother, Cher, before she gives birth. Tracking her down at a party, he nearly manages to knock her unconscious with a shoe, but instead hits her friend.
Cher is completely oblivious to the terminator’s presence and intentions. Carrying on about her business, she continues shopping, skipping classes and orchestrating teacher romances. The terminator is close on her tracks though.
That’s when her stepbrother Josh shows up on the scene. He teases her and they carry on like normal fighting over TV channels, until their TV is blown to bits when the terminator breaks in the house. Angry and dense, Cher insists “the overgrown dope” replace her TV. Out of the goodness of her heart, she even offers him a make-over.
Before the terminator manages to kill her, Josh strips away a mask and becomes Kyle Reese. After barely escaping their attacker, Kyle explains to Cher that he is her son’s, daughter’s, previous dog’s owner whom the resistance sent back in time to save her (Cher faints).
Cher is mortified upon awakening when she sees the ugly, plain, non-designer, undercover outfit which Reese insists she wear. Shortly after her clothing change, the terminator catches up to Reese and Cher on the outskirts of town at a coffee shop (Cher insisted on some caffeine intake).
The terminator’s overconfidence is his mistake when attempting to attack Cher. As she dodges his gun fire, her coffee launches into the air spilling all over him. His steps slow as the coffee seeps into his wires. He comes to a stop and falls over in front of a wet eyed Cher. “I can’t believe I dropped my coffee and am wearing non-designer clothes today! Ugh… Worst day ever!”
And that was the end of that terminator.
The Mannequin Switch Tremetheus