Its Movie Mash-Up
Monday – I’m mashing them up for you… enjoy!

This week we have Prometheus
and Tremors…
Despite the dramatic nature of giving birth to her alien
child, Dr. Elizabeth Shaw did in fact love her new born. She loved her tough-skinned,
alien baby so much that she performed CPR and advanced surgical procedures in
order to revive him before leaving the planet. By the time they reached Earth,
little Jeeves had gone through many transitions and finally reached his
worm-like young adult state. Overwhelmed by the miraculous nature of her pregnancy
and of Jeeves’ survival, Dr. Shaw swore to make a good life for him on Earth. 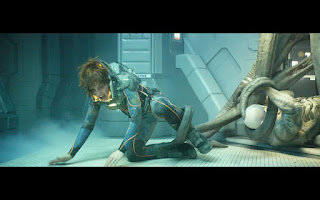 Unfortunately, smoothly calculated plans almost always go awry.
Though Jeeves and Dr. Shaw spent a good many years in Nevada hunting rattle
snakes and gambling, trouble came when a young university student named Rhonda
began running seismographs
in the area. That was what triggered Jeeves’ mad killing spree. As a ground
dwelling creature, he feared for his mother’s life and decided to destroy
whatever threat was creating scary electronic signals.
By the time poor Shaw discovered her dear Jeeves’ had been
up to trouble, it was too late. Many lives had been taken, including Jeeves’
life. Splattered at the bottom of a canyon, Jeeves’ bones rested for many years
as Dr. Elizabeth Shaw visited the remains of her miracle child. Only memories of
their happy times brought her joy.
The End!
Terminatorless Twilight Park