Today will be a fun post, but first I want to send a big
thanks to Craig Schmidt for nominating my blog for “The Next Big Thing.” Craig is
in the process of pursuing publication for his YA Urban Fantasy novel, Fractured Myths. It really means a lot
that Craig has nominated me because I am a devoted admirer of his writing style.
Visit him at whY A Write.
So, Craig has asked me to answer ten questions regarding my
novel and then nominate other Authors for “The Next Big Thing.”
The 10 Questions are:
1- What is the working
title of your book?
The Labyrinth Wall
2- Where did the idea
come from for the book?
This is an interesting question. The idea was originally a series concept
sparked from Dante’s Inferno but in a Fantasy world (think Lord of the Rings
meets Labyrinth). That then melded with my thought of “what if I explored a
character that never had a childhood because they are actually a creation? So
as a writer I am forced into a very strange perspective of someone learning to
understand and trust others.” All those strands of thought intertwined into
what is now The Labyrinth Wall, the first novel in my Obsidian series.
3- What genre does
your book fall under?
To be very honest I
think it would best fit New Adult Epic Fantasy, but since
“New Adult” is a bit controversial
still; we’ll say YA Epic Fantasy.
4- Which actors would
you choose to play your characters in a movie rendition?
Yikes, this question
has stumped me. I really like the idea of unknown actor and actresses. For the
sake of this question, I figured out a possibility for my main character, which
would be Dakota Fanning. She can dish out some depth and her build is what I
imagined for my character. I think she could pull off the complicated layers of
Araina.
Araina – Dakota Fanning 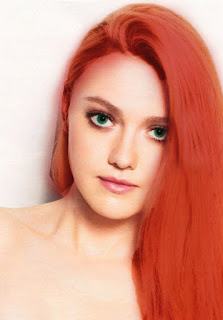 (yes… I Photoshoped her hair red and her eyes green to be Araina)
5- What is the
one-sentence synopsis of your book?
This is a tricky one.
Here’s what I’ve got…
Araina’s constant
efforts to avoid starvation and the brutality of her creators have become
routine, but upon witnessing a mysterious stranger enter her world magically
through a wall, Araina discovers for the first time there may be a better existence
outside of the labyrinth.
6- Will your book be
self-published or represented by an agency? (Feel free to add a link)
Still in the works, so
I’m not certain.
7- How long did it
take you to write the first draft of your manuscript?
Oh… I think three
months.
8- What other books
would you compare this story to within your genre?
This is tough as well.
I feel it is pretty unique, but I will say I attempted a first person, fast
paced feel similar to The Hunger Games. That may sound odd paired with the idea origins of the story, but come on… it’s fantasy, lets push the boundaries a bit.
9- Who or What
inspired you to write this book?
I have an extremely
active imagination which is what led to the odd thoughts I mentioned in my
answer for question two.
10- What else about
your book might pique the reader’s interest?
This story is not just
one of survival, but of learning to trust and recognizing the reality of being
alive. I think people might find the character’s odd predicaments engaging.
Past that, I’m a “big picture” thinker. If it comes across as I intended, then
people will find some mystery and be asking themselves questions. I always like
to be guessing when I read a book or watch a movie, so I like to leave readers
guessing. I put a lot of effort into making not only the story-line very
dynamic, but the odd mix of characters fresh. The spunky dialogue of the unlikely companions keeps the story propelling forward.
I am nominating the following Authors for “The Next Big
Thing” (Week 28):
Cally Jackson
Cherie Reich
Rachel Morgan
Fiona McLaren
Kelly Hashway
Check their respective blogs for “The Next Big Thing” posts
on December 12th =) Some of them have been previously nominated, but
maybe they have another project they could discuss or a new angle to answer
some of the questions. Either way, they are fantastic writers with great blogs, so pop by for a visit!
Keep imagining friends!
Legends of the Conjuring Gift Sleepy Blonde

Orlando Event: Barnes & Noble Get Pop-Cultured Thank you to everyone who has been kindly inquiring when I’ll be out for an event again. I have not been able to make the time commitment for any conventions and probably will not be able to do so until the end of the year (due to preparations […]