What will you find in the “Throwback Thursday Fantasy Relay” series? I’ll feature either a Fantasy book TV show, or movie, share some lesser known information on it and if I’m familiar with it, I’ll share a brief review as well. The fantasy genre is vast, encompassing epic fantasy, contemporary fantasy, and more, so this series is full of variety. There are so many fantasy films and books that are making a lasting impression on society and are worth discussing, so here I go… Perhaps you’ll stumble on a fantasy gem you’d never heard of in this series. 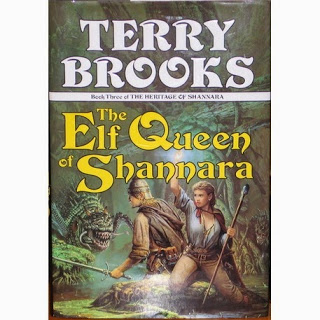 Heritage of Shannara written by TerryBrooks

“Find the Elves and return them to the world of Men!” the shade of the Druid Allanon had ordered Wren.
It was clearly an impossible task. The Elves had been gone from the Westland for more than a hundred years. There was not even a trace of their former city of Arborlon left to mark their passing. No one in
the Esterland knew of them — except, finally, the Addershag.
The blind old woman had given instructions to find a place on the coast of the Blue Divide, build a fire, and keep it burning for three days. “One will come for you.”
Tiger Ty, the Wing Rider, had come on his giant Roc to carry Wren and her friend Garth to the only clear landing site on the island of Morrowindl, where, he said, the Elves might still exist, somewhere in the
demon-haunted jungle.
Now she stood within that jungle, remembering the warning of the Addershag: “Beward, Elf-girl. I see danger ahead for you . . . and evil beyond imagining.” It had proved all too true. Wren stood with her single weapon of magic, listening as demons evil beyond all imagining gathered for attack. How long could she resist?
And if, by some miracle, she reached the Elves and could convince them to return, how could they possibly retrace her perilous path to reach the one safe place on the coast?
My Review: My Rating on a
Five Star Scale: 5/5As I’ve mentioned before in my reviews, I like to touch on certain elements of books or movies that really enhance the experience for me. I’ll follow the format I’ve used in most of my previous reviews.

Characters:
The characters in the book are engaging and unique. Specifically I truly love Wren, the strong female lead. Beyond her strength, I think Wren’s sense of hope and determination are what make her
character hard not to love. Another signature of Terry Brooks books that holds true in this one are the lovable animal side characters.

Suspense:
Mystery is woven into the plot of this book from start to finish. Who doesn’t love a fabulous mystery
such as the disappearance of all the elves?

Pacing:
Typically Terry Brooks books are well paced, which is true for the Elf Queen of Shannara. Though similar to Tolkien’s books concerning borrowed creature races and beautifully constructed fantasy worlds, Terry Brooks writes with less slow transitional scenes and effectively includes detail without having too much detail. I find the book to be a very smooth and exciting read.

Awesomeness:
Being that it is one of my favorite books, it is safe to rate the Elf Queen of Shannara as completely awesome in my opinion. 🙂
So what do you think? Is this one you like or do you think you’ll check it out? Do you have any other book or movie recommendations for this series? And what else is going on in your worlds? I love to hear about
your days.
Keep Imagining,
Emilyann
The Haunted Realm Summary Reveal, Dave Dorman at Creative Con & More Throwback Thursday Fantasy Relay: The NeverEnding Story!